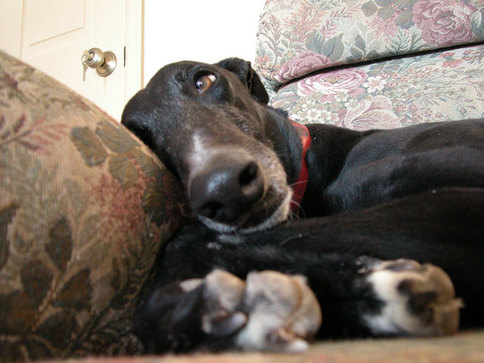 Writing about greyhound anesthesia today is far changed from 5 to 10 years ago. We have moved into an age where just about every veterinarian has isoflurane gas (some even use sevoflurane) and the dreaded barbiturate induction (Surital, BioTal, Pentothal) has been virtually replaced by ketamine/valium or alternate injectables.

New anesthetics have been introduced -- most notably propofol, which is rapidly eliminated and has been a Godsend for compromised patients. Injectables like Torbugesic and Telazol have been incorporated into everyday anesthetic protocols. The introduction of Yobine, which reverses Rompun, has made its use much safer for short procedures. Similarly, the new Domitor is reversed by Antisedan.

Most anesthetic protocols typically incorporate 2 to 4 of these drugs. Additionally, atropine is widely used to prevent excessive salivation and keep the heart rate up. Your vet may have 4-5 different combos that he uses quite routinely. For instance, he'll have his most commonly used standard regimen for healthy dogs, very likely the same as what he'll use on your greyhound. Additionally, perhaps, another for epileptics, another for aggressive models, another for compromised patients, and yet another for quick up-and-down procedures.

Which to use? I've seen several very different "greyhound anesthesia protocols." The most widely used seems to be acepromazine/atropine premed followed by ketamine/Valium induction and isoflurane gas, same as in the general dog population. At our clinic, we never give more than 1 mg of acepromazine to a greyhound. Several years back, it would have been fair to walk through your vet's door, protocol in hand. Nowadays, he may well have something better for the situation. Maybe it's a short procedure and he can get by with putting your greyhound out briefly with propofol or one of the new reversible combos. Maybe he's induced seizures in a greyhound with ketamine/Valium and prefers to replace it with Telazol or a narcotic. Maybe he's simply heard horror stories of greyhound anesthesia and just prefers to "play it safe" with propofol/isoflurane.

But, even propofol, like everything else, has its drawbacks. Occasionally, a dog abruptly stops breathing on induction - not to worry, so long as you're paying attention, this can be rectified immediately. Sometimes dogs just won't stay asleep on propofol and the procedure takes twice as long as it should. Some vets prefer their old tried and true to putting up with this on a regular basis, reserving the propofol for select cases.

​Often, the safest anesthetic protocol is the one your veterinarian has the most experience with. I think the key is using a vet who anesthetizes lots of ( or at least some) greyhounds. Since the greyhound has historically been touchy with anesthetics, some of us feel most comfortable with  what has always worked. If your vet's been anesthetizing greyhounds for years with halothane or Metofane and prefers it to isoflurane, I wouldn't worry. Often vets that use these gases rely heavily on the injectable induction agent and may use only marginal amounts of gas. Worthy of mention is anesthetic monitoring.

​Gizmos are nice – there are lots of them. EKGs and pulse oximeters are the most commonly used. However, these are preferably in addition to – not instead of – a real live technician monitoring the dog. Given a choice between equipment and a capable tech, I’d choose the tech in a heartbeat. If your vet is new to sighthound anesthesia, see if he minds contacting the adoption vet for some suggestions. Both of you may be more comfortable when your best friend needs anesthesia.

What's in those Blood Tests?

When your veterinarian sends your greyhound’s blood to a lab he is most commonly asking the lab to run a CBC (Complete Blood Count). This common analysis covers these items:
On ocassion the veterinarian may also ask for additional information. Some of the more common tests are
If you don’t understand what your veterinarian has ordered, ask.

Greyhound bloodwork has enough differences from “other dog” bloodwork to sometimes make it deceivingly “normal” or “abnormal” if one isn’t familiar with these differences. The salient differences are discussed below.


Greyhounds have significantly more red blood cells than other breeds. This elevates parameters for RBC, hemoglobin, and PCV/HCT, and is the reason greyhounds are so desirable as blood donors. Most veterinarians are aware of this difference.

WBC
Other greyhound CBC changes are less well known. The greyhound’s normally low WBC has caused more than one healthy greyhound to undergo a bone marrow biopsy in search of “cancer” or some other cause of the “low WBC.”

Platelets
​Likewise, greyhound platelet numbers are lower on average than other breeds, which might be mistakenly interpreted as a problem. It is thought that greyhound WBCs, platelets, and total protein may be lower to physiologically “make room” in the bloodstream for the increased red cell load.
Compounding these normally low WBC and platelet numbers is the fact that Ehrlichia, a common blood parasite of greyhounds, can lower WBC and platelet counts. So if there is any doubt as to whether the WBC / platelet counts are normal, an Ehrlichia titer is always in order. The other classic changes with Ehrlichia are lowered PCV and elevated total protein. But bear in mind that every greyhound will not have every change, and Ehrlichia greyhounds can have normal CBCs.

T.P. & Globulin
Greyhound total proteins tend to run on the low end of normal — T.P.s in the 5.0’s and 6.0’s are the norm. While the albumin fraction of T.P. is the same as other dogs, the globulin component is lower.

Creatinine
Greyhound creatinines run higher than other breeds as a function of their large lean muscle mass. A study at the Auburn University College of Veterinary Medicine found that 80% of retired greyhounds they sampled had creatinine values above the standard reference range for “other dogs.” As a lone finding, an “elevated creatinine” is not indicative of impending kidney failure. If the BUN and urinalysis are normal, so is the “elevated” creatinine.

T4
These figures are from a University of Florida study of thyroid function in 221 greyhounds — 97 racers, 99 broods, and 25 studs — so it included both racers and “retired.” While greyhound thyroid levels are a whole chapter unto themselves, a good rule of thumb is that greyhound T4s run about half that of other breeds.

And lastly, the good news — greyhound urinalysis is the same as other breeds. It is normal for males to have small to moderate amounts of bilirubin in the urine. 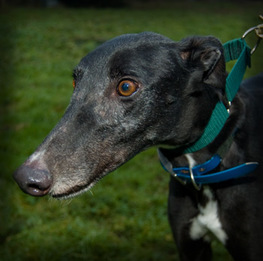 Emma's Jewel (October 11, 2002 - February 5, 2009)
​Our Emma came to us on January 17, 2009. Emma was one of the sweetest, easiest-going girls her foster mom has had. Emma's foster mom returned home on the evening of February 4th to find Emma in need of medical care. She rushed her to the nearest emergency clinic. After being reassured by them that they fully understood the specific needs of a greyhound, Emma's foster mom left her in their care. The call came at 3:30 in the morning: Emma had died on the table at 1:30 AM. Upon further consultation with several authorized veterinarians, it was determined that Emma was given a dose of medication that was higher than the maximum amount listed for her weight and she was given a higher than normal flow of anesthesia. The combination caused her to go into cardiac arrest. The antidote to reverse the effects of the first medication was never administered.

All of us at Royal Hounds are deeply saddened by the loss of our Emma. She had such a bright future and it was stolen away from her when her life was cut short by the negligence of a professional that claimed an expertise with the breed.

We would like to ask that each of you find your nearest emergency clinic BEFORE you need it, and then run a quick Internet search on the clinic and the Vets in practice there. Had we done so with this particular clinic we would have seen the numerous complaints and negative reviews posted and known that it was not a good place to go.